Provocations #4 – A Matter of Scale 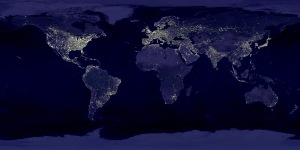 Provocations #4 is a wake-up call that should scare the bejesus out of you.  Here we take a look at questions of scale, the second of the ‘trinity of the unwise’.

In this context I am referring to the scale of the problems that we are facing.  The factual reality is that everything is amplified by the sheer scale of humanity and by how we chose to live.  There are two sides to this same coin: the explosive growth of the human population, and the increasing rate at which each person is consuming resources.  In the simplest terms, there are more people and each person is having a greater impact on the planet.

Let’s Start With the Numbers

As I write this, the world is very quickly approaching 7,500,000,000 people according to the US Census Bureau.  That is seven and one half BILLION people (7.5B)!

This is the scaling factor: take everything that you might do over the course of a day —flushing the toilet, commuting to and from work (consuming and emitting hydrocarbons), throwing away your old plastic toothbrush, whatever— and multiply it by 7.5B.  There is of course nuance and variability from person to person, and from region to region, but the general argument holds.  The point is, that the scale of humanity is staggering. It is so mind-bogglingly huge, that it is likely beyond our capacity to comprehend.

But … it gets worse. The population is growing exponentially, presently at a rate of 1.1% per year.  This looks like this: 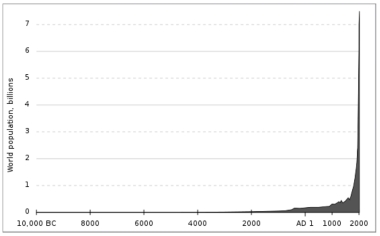 If the growth rate were to remain constant at 1.1%, the human population will double approximately every 63 years. Informed estimates put the global human population at about 9.8 billion by 2050 (e.g. the United Nations).  The population scale factor is growing, and our future generations will face much greater challenges than we do today.

Never before has the world seen a single species (Homo sapiens) become so absolutely dominant, so quickly.  The Earth, as an ecosystem, is in uncharted territory.  It is entirely novel, so much so in fact that scientists are now considering (and debating) that we may have entered a new epoch, the Antropocene.  But we know from systems and complexity theories that this does not bode well. These topics will almost certainly be the subjects of future blogs.

While the population is growing explosively, the impact on the planet that each person has is also growing.  It’s a scaling factor double whammy. Let’s take the example of a simple and seemingly (to some) harmless plastic bottle of water.  Twenty years ago, give or take, most of us were content to drink water from a public source, out of a cup or a drinking fountain. Today bottled water has become commonplace and is now globally ubiquitous. The simple arithmetic is scary.

You think, “Hey, it’s just one plastic water bottle, what impact can that have?” Now imagine that every person thinks the same thing: one bottle a day for one year: that’s suddenly 2,737,500,000,000, nearly 3 trillion water bottles per year.  We’re not there yet, but we’re heading in that direction.  Once estimate from 2014 had us using more than 100 million bottles per day.

Let’s think about those water bottles a little bit more (to say nothing of soda, juice, plastic-lined paper cups from the ‘green mermaid coffee company,’ etc.).  These bottles are filling our landfills, clogging our waterways, hell they’re even beginning to overwhelm the oceans.  Beyond the simple disposal of this bottle, the waste is equally staggering.  The oil for that bottle has to be extracted from deep underground, shipped, refined, shipped some more, turned into plastic, shipped again, turned into a bottle, shipped once more to a bottling plant, filled with liquid, shipped yet again, and so on.  It is endless!

A vast supply chain is needed and it too is driven by the consumption of raw materials and energy, and the production of waste.  It is fractal-like, in that the deeper you dig, the more similarities you see in consumption at every level of the process.  Do you see? The global impact of your humble bottle of water is almost infinite. I could go on and on, the ship to transport the oil is made of steal which had to be mined; so too for the oil rig…

In just a few decades there has been an explosion of personal disposable stuff.  Everyone didn’t need to have their own smartphone, tablet device and laptop, bluetooth speakers, printers, toys, and what not.  And all of these are designed with planned obsolescence and destined for the landfill after a very short period of use.  Virtually everything we consume is toxic. Each year we invent more things we didn’t and don’t need.  Now, multiply that by 7.5B.

There are two dimensions that amplify mankind’s impact on the planet: exponential human population growth and a similar growth in our per capita consumption and waste. These scaling factors greatly exacerbate all of our problems.

Our civilization is based on an economic fallacy: the need for endless growth and insatiable consumption.  This is patently unsustainable, as the planet on which our lives depend is finite, it has limited resources. This is a form of insanity.  It cannot continue.  We can choose to confront this reality directly and immediately and act accordingly, or we can allow it to confront us.  Either way, this confrontation is inevitable.

In the next installment, Provocations #5 will look at Compounding Problems, the third and final of the Trinity of the Unwise.

“The greatest shortcoming of the human race is our inability to understand the exponential function.”